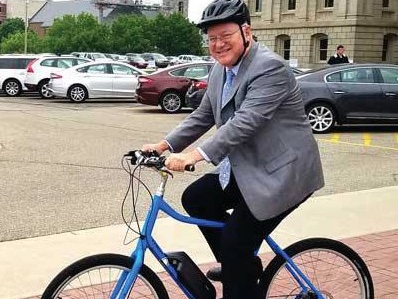 One of the many developments in Michigan bicycle laws in 2018 includes legislation covering electric bikes. On January 28, 2018, amendments to the Michigan Vehicle Code relating to e-bikes took effect. This is what you need to know about the new electric bike law in Michigan.

The new laws define electric bikes, or e-bikes as:

“A device upon which an individual may ride that satisfies and is equipped with all of the following: 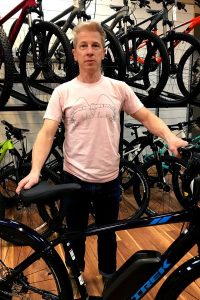 (i) A seat or saddle for use by the rider.
(ii) Fully operable pedals for human propulsion.
(iii) An electric motor of no greater than 750 watts

and, falls into one of the following three categories:

Use of Electric Bikes – Where to Ride

The new electric bike law allows a person to operate a Class 1 e-bike on a linear trail (a multi-use trail that runs from point to point) that has an asphalt, crushed limestone, or similar surface, or a rail trail. However, the law provides for regulation or prohibiting the operation of Class 1 bikes by local agencies with jurisdiction over the trail. Therefore, check with your local ordinances to see if Class 1 e-bikes are permissible on these types of trails nearby.

Also worth noting, the electric bike law does not apply to a Congressionally authorized public trail system. In Michigan, this is important to know, since we’re home to many miles of the North Country National Scenic Trail.

When riding an electric bike on a roadway, the rider “has all of the rights and is subject to all of the duties applicable to the driver of a vehicle under this chapter, except for special regulations in this article and except for the provisions of this chapter that by their nature do not apply.” Further, the law states that an individual riding an electric bicycle is “subject to the same requirements under this act as an individual riding a bicycle.” Simply put, when riding an e-bike on the road, treat it like a bicycle.

Not a Motor Vehicle

The law specifically excludes e-bikes from the definition of “motor vehicles,” which is the same for mopeds and motorcycles. This means purchasing auto insurance for an electric bike isn’t required. However, it is recommended that e-bike owners consult with their insurance agent to see if it is covered under their homeowner’s or renter’s insurance policy. If not, we suggest purchasing a rider on your homeowner’s or renter’s policy. There is also bicycle-specific insurance.