Trekking To Traverse City – 250 Mile Ride To “Lids For Kids” 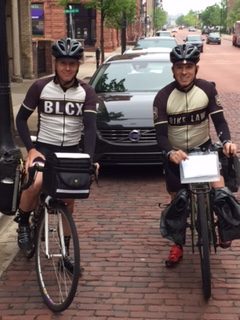 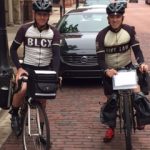 Michigan Bicycle Law attorney Bryan Waldman and friend Wade Burch plan to enjoy the Michigan scenery as they travel to the Lids for Kids bike helmet giveaway in Traverse City. And they’re going to get an up-close and personal view of the state. You see, they’re not taking the 250-mile trip by car. They’re riding their bikes.

Bryan and Wade left downtown Grand Rapids on their bikes Thursday morning, May 12, with their final destination being the annual Lids for Kids bike helmet and bike safety event in Traverse City. The event is co-sponsored by the Sinas Dramis Law Firm.

On their first day of bike riding, Bryan and Wade will rack up a little more than 100 miles, traveling alongside Lake Michigan and passing through the cities of Muskegon, Whitehall and Pentwater, until stopping in Ludington.

On the second day, Friday, May 13, the cyclists will continue their bike ride from Ludington to Glen Arbor, a trip of about 90 miles. They will pass through the lakeshore towns of Manistee, Onekama, Beulah, and Empire, and to the Sleeping Bear Dunes National Lakeshore.

The cyclists are uncertain of their bike route on Saturday, May 14. “We will see how we feel and decide if we will ride from Glen Arbor to Traverse City, or try to do some riding in the Leelanau Peninsula,” Bryan said. 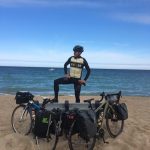 “I have ridden this distance before,” Bryan remarked. “Most of the bike rides I do are fast rides — racing and training for races. This will be a slow bicycle touring type of ride, taking our time and enjoying all that Michigan has to offer.”

Bryan is no stranger to slower-paced bike rides. “I have done some tours like this, in Utah, Colorado, and Montana,” he said. “The first being one with my father for his 50th birthday. We biked from Brian Head Utah to Bryce National Park, to the Grand Canyon and to Zion National Park, with the longest day being around 120 miles. A truly amazing experience and even more awesome being able to share it with my dad.”

Stay tuned for “Trekking to TC” updates (below). We’ll post more pictures of the bike ride here, and on social media! 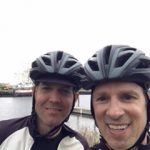 Bryan and Wade at Fisherman’s Landing

Trekking to TC update: At 12:30 p.m. on May 12, the cyclists biked more than 40 miles and stopped at Fisherman’s Landing in Muskegon. 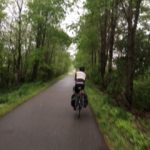 Trekking to TC update:  To get to Muskegon, the pair took the Musketawa Trail. “Great trail from Grand Rapids,” Bryan said.

Trekking to TC update: This afternoon, Bryan and Wade stopped for 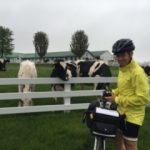 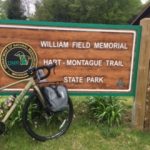 ice cream at the Country Dairy on the Hart-Montague Trail.  “Stop there, you won’t regret it!” Bryan said. 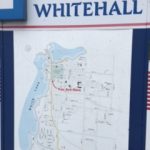 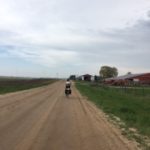 Trekking to TC update: Bryan and Wade arrived in Ludington around 7 p.m., where they will stay for the night. “We’re going to dinner,” Bryan said after the long bike ride. “We’re going to have a hard day tomorrow. But the scenery is going to be beautiful.” 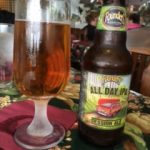 Trekking to TC update: A well-deserved drink before a good night’s sleep. Until tomorrow morning ….

Trekking to TC update: Bryan and Wade got an early (and chilly) start out of Ludington this morning. They stopped in Manistee to grab breakfast, gave a thumbs-up next to Lake Michigan, and are now on their way to Frankfort. 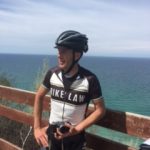 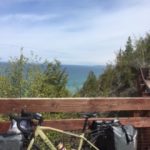 Trekking to TC update: Bryan and Wade arrived in Arcadia around 11:30 a.m. What a gorgeous view of Lake Michigan! 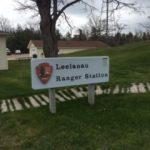 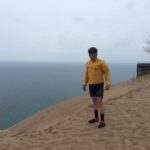 Trekking to TC update: Bryan and Wade are making good time! They arrived in Glen Haven around 4:30 p.m., by way of the Pierce Stocking Scenic Drive, on the Sleeping Bear Dunes National Lakeshore (Leelanau Peninsula). 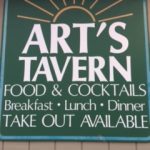 Trekking to TC update:  Bryan and Wade arrived in Glen Arbor, the final destination for the day, around 6 p.m. “Time for a beer,” Bryan said. Tomorrow, the will reach their final destination: the Lids for Kids event in Traverse City. 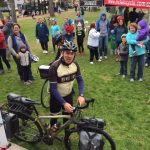 Trekking to TC update:  After biking some 250 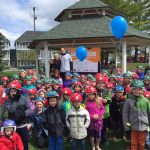 miles, Bryan and Wade arrived in Traverse City around 11 a.m. at the Lids for Kids event. Congrats to them both! And they were greeted by dozens of kids, who love their new bike helmets!