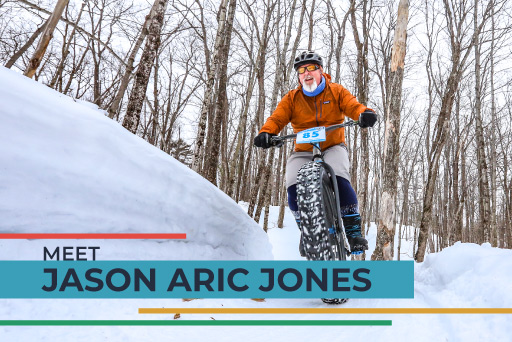 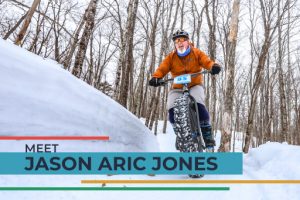 The Michigan Mountain Biking community is a group of passionate individuals who have overcome quite the ‘bumpy ride’ in securing trail access and maintenance. For the past 30 years, Jason Aric Jones has been an important leader and played a key role in opening public access to trails around the state, including the DTE Energy Foundation Trail.

While attending Michigan State University, Jason enjoyed road biking until he was hit by an automobile. Fortunately, he suffered no major injuries, however, his bike was totaled. So, when a friend offered a mountain bike for him to borrow, they hit the trails and Jason fell in love with the sport.

During his time as President of the MMBA, Jason became passionate about the lack of mountain bike trails in the Lower Peninsula’s largest State Recreation Area, Waterloo. He negotiated several corporate relationships with large sponsors to build advocacy for mountain biking in Michigan. Yet, he felt that in order to strategically increase the reach of mountain biking, he needed to partner with another Michigan company with established brand recognition. And he was committed, even stepping down from his role as President of MMBA to focus solely on building trails at Waterloo.

Jason decided to pitch the idea of a race team to Bell’s Brewery, knowing there was a synergy between craft breweries and the biking community. Long story short, the Bell’s Mountain Bike Team was born and not only built recognition for Bell’s Brewery but for the Michigan Mountain Biking community. This led to the establishment of other valuable partnerships and relationships later on and laid the groundwork necessary in securing funding for what is now the DTE Energy Foundation Trail. 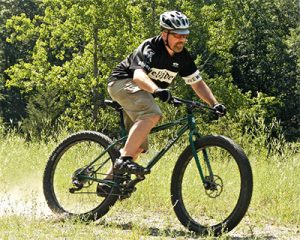 After almost 20 years of writing letters, community rallying, public input meetings, and other important planning and stakeholder meetings, Jason finally got the green light to build a new mountain biking-optimized single-track trail system at Waterloo State Recreation Area in 2014. Knowing it would be expensive to build a professional, sustainable-flow trail, the naming rights were sold to DTE Energy Foundation, providing the seed money to get started and establishing yet another valuable partnership.

“We cannot afford to become complacent about our trails,” Jason reminds current mountain bikers, “Advocacy, access, trail building, work and maintenance used to be just as big as racing, and while racing has its place, it is fundamentally a self-indulgent expression of cycling. Many cyclists haven’t experienced having their trail access threatened, and therefore don’t fully understand the importance of being vigilant. The higher calling of trails and mountain biking is to build community connections through the preservation and appreciation of the natural landscape.”

Jason has overseen the DTE Trail Executive Committee during the entire 5-year building process. Now with 4 loops and 22 miles of trail, it is ranked in the top 50 Mountain Biking Trails in the World and has visitors from near and far. Without the continued dedication of Jason Aric Jones and others like him, mountain biking trail systems and access to public recreation areas would not be possible.