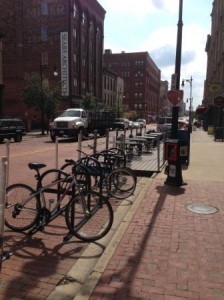 A five-month, $600,000 bike safety campaign has been successful in drastically cutting the number of Grand Rapids bicyclist-motorist crashes.

The City of Grand Rapids’ “Driving Change” campaign included billboards, TV commercials and ads on buses throughout the city from May 2016 through September 2016. The message emphasized the rules of the road for bicyclists and motorists, and that these segments must work together to stay safe

According to Grand Rapids officials, during the five-month campaign, there were two fatal or serious bicycle crashes. This is an 81 percent decrease from the 11 crashes during the same five-month period in 2015. Total crashes involving bicyclists also decreased during the same time, from 72 in 2015 to 42 in 2016.

Notably, in 2013 and 2014, Grand Rapids had Michigan’s second-highest bicycle crash rate. However, the 42 crashes between May and September 2016 is reportedly the lowest in that time period going back to at least 2004.

But that could soon change. The Michigan Senate recently passed legislation that would require motorists to give bicyclists at least 5 feet when passing them on the roadway. The bill is set for a vote in the Michigan House later this month. Lansing personal injury attorney Bryan Waldman, who concentrates his practice on bicycle law and is an avid cyclist, testified on behalf of the League of Michigan Bicyclists in support of the legislation.

In the meantime, Grand Rapids will be continuing its bike-friendly attitude. It has proposed $75,000 for bike lanes in its 2016-17 city budget and has asked for a $27 million federal grant to fund several projects, including cycle tracks.