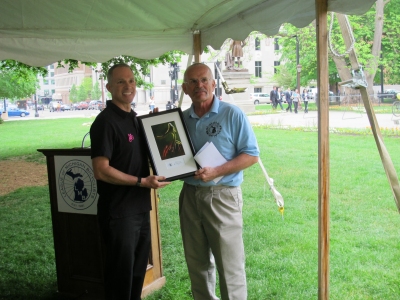 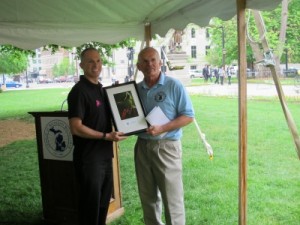 Congratulations to Bryan Waldman for receiving the League of Michigan Bicyclists’ Advocate of the Year Award at the Annual Meeting and Awards Ceremony for the cycling organization which was held on May 22, 2013 at the Michigan Capitol, in Lansing. The ceremony was part of the 8th Annual Lucinda Means Bicycle Advocacy Day, organized by the League of Michigan Bicyclists, Michigan Mountain Biking Association, Programs to Educate All Cyclists, and Michigan Trails and Greenways Alliance.

Rich Moeller, Executive Director of the League of Michigan Bicyclists, presented the award to Bryan and in his introductory remarks, joked that Bryan was one of the few bicycle racers who was willing to give back to the bicycle community. 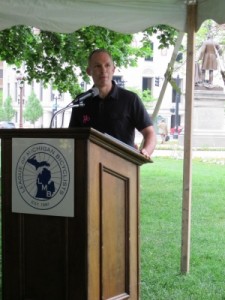 In reality, many bicycle racers give back, but it was nice to see Bryan’s hard work recognized. The League of Michigan Bicyclists (“LMB”) honored Bryan for his contribution to the pursuit of improving the legal rights of bicyclist in Michigan and noted his successful representation of John Lindenmayer, the Advocacy and Policy Director at the LMB, in a case accusing John of impeding traffic for simply riding his bicycle in the road (see Riding a Bike is Not a Crime at https://michiganbicyclelaw.com/bicycle-violation-dismissed/), his work authoring “A Legal Handbook for Michigan Cyclists,” his assistance writing position papers on various legislation that would have limited the rights of Michigan cyclists, and his representation of numerous cyclists injured by motorists while legally riding a bicycle on Michigan roads.