Riding a Bike is Not a Crime! Bicycle Violation Dismissed by Lansing Judge 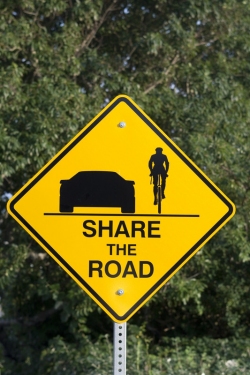 It was a Friday evening in June when John Lindenmayer left the League of Michigan Bicyclists‘ (LMB) office in Lansing, MI and rode his bicycle to the City Market. Around 6:30 p.m., he left to head home, utilizing the same route he had ridden dozens of times before.

Traffic was light on Michigan Avenue, a five-lane road, which runs from the front steps of the State Capitol right past Michigan State University. John traveled eastbound in the far right (curb) lane for several blocks, without incident. Then, only blocks from home, he heard a honk imme¬diately behind him, followed by a siren. John turned to find a police car with its lights on. He promptly pulled over and parked his bike. 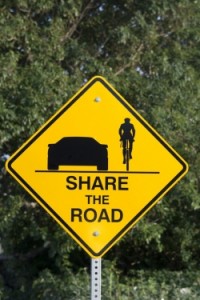 John was confronted by a City of Lansing police officer who was professional and polite, but told him, “The roadways are made for motor vehicles, and you can ride your bike on it, but you’re impeding traffic.” As the Advocacy and Policy Director for LMB, John knew that arguing was going to get him nowhere. Instead, he calmly explained that Michigan law allowed bicyclists to be on the road and that he was not violating the law. Amazingly, stating that “we can handle this a different way,” the officer called for backup. Within minutes three additional police officers, including a Sergeant, arrived at the scene.

Ironically, the entire eastbound travel lane, the same lane John was traveling in, was entirely blocked by the police. During the 30-minute traffic stop, John documented the situation by taking notes, photos, and video with his phone. Ultimately, John was issued a ticket for “impeding traffic.”

Most cyclists would have paid the $115 fine that accompanied the civil infraction, deciding it simply wasn’t worth the time and effort to fight it. John, however, was different. While he didn’t leave his office that day looking to prove a point, it was now a matter of principle. He was de¬termined to prove that he did not violate the law and to stand up for cyclists’ legal right to use Michigan’s roads.

In September, John received a Notice to Appear in court for the offense of a “bicycle violation.” During an informal hearing before a magistrate he learned that the officer recorded the traffic stop using a dashboard camera. The officer indicated that he thought John was riding too far from the curb and was backing up traffic for blocks. The magistrate ex¬plained that he was being charged with violating MCL 257.676b:

A person, without authority, shall not block, obstruct, impede, or otherwise interfere with the normal flow of vehicular or pedestri¬an traffic upon a public street or highway in this state, by means of a barricade, object, or device, or with his or her person . . .

John rebutted that another provision of the Michigan Vehicle Code, MCL 257.657, gave him, and all other cyclists, “all of the rights . . . applicable to the driver of a vehicle . . .” He admitted that while he was not as close to the curb as he could have been, he was within the confines of MCL 257.660a, because, while cyclists are generally required to ride “as close as practicable to the right-hand curb,” there are exceptions to this general rule as outlined in subpart (c) of the statute:

When conditions make the right-hand edge of the roadway un¬safe or reasonably unusable by bicycles, including, but not limited to, surface hazards, an uneven roadway surface, drain openings, debris, parked or moving vehicles or bicycles, pedestrians, animals, or other obstacles, or if the lane is too narrow to permit a vehicle to safely overtake and pass a bicycle. . .

He explained that he was riding predictably and in a straight line in order to avoid hazards such as getting “doored” by car doors opening into the travel lane from parallel parked cars, and to avoid the crumbling edge of the road. Furthermore he expounded, given the fact that bicyclists are a part of the traffic, according to MCL 257.69, he did not understand how he then could also be obstructing it. Unfortunately, the magistrate disagreed with John and found that he violated the statute.

John was more determined than ever to prove that he had not violated the law. However, given what had occurred before the magistrate, John decided that he needed the assistance of an attorney. After contacting my office and reviewing the facts, I agreed to represent John.

To better understand the facts, I filed a Freedom of Information Act (FOIA) request with the City of Lansing Police Department. Specifically, we requested a complete copy of all records relating to John’s ticket and a complete copy of the in-car/dashboard video.

Once John was able to see the video produced in response to the FOIA request, he realized that only a small excerpt of the video was actually played for the magistrate. In fact, only a few seconds were played, which happened to be a short time frame where he was riding furthest from the right-hand edge of the road. Additionally, when viewing the whole tape, it reinforced John’s claims that he was riding safely, predictably, and within the confines of the law. Interestingly, the tape also showed that a separate police car was traveling directly behind John before making a right-hand turn. One can only assume that this officer did not believe John was violating the law since he or she did not stop him. Further, the tape showed that John’s presence on the road was certainly not blocking traffic, as traffic was extremely light and drivers were easily passing him by using the left travel lane.

Finally, the tape also contained audio of the conversation and comments by the police officer on his radio:

I want you to know I’m by Sparrow with a biker requesting your presence . . . He’s got long hair. He’s riding his bike in the right-hand lane down Michigan Avenue . . . He’s got traffic backed up. I wondered what was going on, so I get in the left-hand lane and I go up, and people are beeping at this idiot. He is not pulling over or anything else, so I pull him over. He’s like, ‘What are you pulling me over for? What’s your badge number?’ I said, ‘You know, the roadways are made for motor vehicles, and you can ride your bike on it, but you’re impeding traffic . . .’

With this evidence, we requested a formal hearing from the judge assigned to the case, Lansing District Court Judge Hugh B. Clarke, Jr. When we arrived at the hearing, scheduled for November 19, 2012, Judge Clarke expressed concern that his time was being occupied with a $115 “bicycle violation,” when there were more serious issues before the court. However, to Judge Clarke’s credit, he was patient and took time to learn the facts and fully understand the law.

Testimony was presented from the police officer and John. Additionally, John Waterman of Program to Educate All Cyclists (PEAC), a League Certified Instructor by the League of American Bicyclists, testified as an expert witness on safe bicycle operation and lane placement. Judge Clarke reviewed the full police video, pausing it at critical moments, and pointing out that he found it particularly noteworthy that the other police officer who was initially directly behind John, did not feel the need to stop him.

After hearing all the testimony, reviewing the evidence, and the law, Judge Clarke rendered an opinion. He found that MCL 257.676b, which prevents people from interfering with the normal flow of traffic, did not apply to bicyclists. In this regard, Judge Clarke stated:

257.676b says: ‘A person without authority shall not block, obstruct, impede or otherwise interfere with the normal flow of vehicular or pedestrian traffic upon a public street or highway in this state by means of barricade, object or device or with his or her person.’ I take this really not necessary to apply in this case . . . It sounds here particularly since there’s an exception for persons who are maintaining, rearranging or constructing a public utility facility. So I think this may more apply to where we blocked off a lane of traffic or a roadway because they’re doing work.

Additionally, Judge Clarke went on to comment that even if he was wrong in his conclusion that the statute did not apply to bicycles, he still did not believe John violated any law. He commented:

I don’t feel that they’re impeding traffic as much as it may be my own apprehension.

Given the fact that John was charged with a civil infraction and his case was heard before a District Court, the decision of Judge Clark has no precedential effect. In other words, other courts are not bound to follow Judge Clarke’s ruling or interpretation of the law.

However, the ruling is significant, in that it is illustrative of how at least one judge, when presented with all of the facts and the law, interpreted this section of the Motor Vehicle Code. It also is a good indicator of how other courts and/or judges would rule when presented with a similar case and offers guidance to other law enforcement in the field about bicyclist’s rights and responsibilities.