Hands-Free Bills Pass in the Michigan House of Representatives 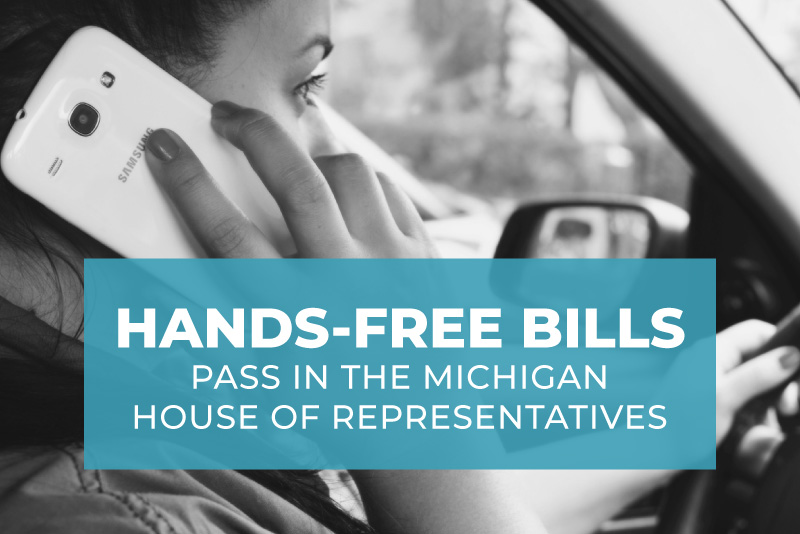 Earlier today, the Michigan House of Representatives, in a bipartisan 75-26 vote, passed a package of hands-free bills intended to strengthen Michigan’s distracted driving laws. We previously reported on the bills and at the time, there seemed to be the votes to pass the legislation but House leadership wasn’t willing to bring the matter before the full House for a vote. Before the hands-free bills become law, the Michigan Senate will need to pass similar legislation and Governor Whitmer will need to sign the bills into law.

Michigan’s current distracted driving law is one of the weakest in the country. Under the existing law, it is only illegal for those driving a car, van, or truck to, “read, manually type, or send a text message on a wireless 2-way communication device that is located in the person’s hand or in the person’s lap, including a wireless telephone used in cellular telephone service or personal communication service, while operating a motor vehicle that is moving on a highway or street in this state.” That’s right, under the current law, it is legal to read emails, watch videos, or interact with social media apps!

Proposed Changes in the Hands-Free Bills

There are a few exceptions to the stricter prohibition on cell phone usage, such as emergencies. These exceptions include: calling 911, using a GPS device (typing in a location is not allowed), reading or entering a phone number to make a phone call.

Again, this law does not limit the use of mobile devices through voice-activated or hands-free software. Additionally, first responders are not limited by these rules while on duty.

The hands-free bills would also change the penalties for distracted drivers. For a first-time offender, a judge would be able to inflict a $100 fine or up to 16 hours of community service. For a second-time offender, those would be raised to a $250 fine and/or up-to 24 hours of community service. After three offenses, a judge will have the ability to suspend a person’s license for up to 90 days if they violate these regulations under this law.

Michigan Bicycle Law will continue to monitor this issue and report on its progress in the Senate. A great deal of the credit for the advancement of this legislation is owed to the Keifer Foundation.