Grand Rapids cycling opportunities are just one reason why it is one of the “Best Bike Cities,” as named by Bicycling Magazine

The October 2014 issue of Bicycling Magazine named its 50 “Best Bike Cities.” The highest-ranked Michigan city went to Grand Rapids (#41). The publication explained that “one reason” Grand Rapids was selected was:

In addition to 35 miles of new on street facilities between 2012 and 2013, there is a booming fat-bike racing scene, including the Farmer’s Fat-Bike Race, where the first place trophy is a snow shovel. 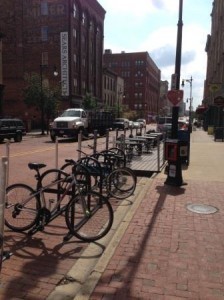 Improvement to the Grand Rapids cycling infrastructure and Farm Team Racing’s Farmer’s Fat-Bike Race certainly make Grand Rapids a better place for cyclists. However, there is so much more that cyclists should be excited about when it comes to Grand Rapids.

Grand Rapids and its surrounding areas have so much to offer cyclists, including:

● Numerous scenic bicycle tours (such as the MSU Gran Fondo and the 100 Grand Bicycle Tour);

● Crisscross – unsanctioned cyclocross races typically held on Sundays at municipal parks throughout the months of September, October, and November;

● Grattan Cycling Race Series – unsanctioned bike races held at the Grattan Raceway on Wednesday nights, beginning in May and continuing through the end of August;

● Cannonsburg – a local ski area used for mountain biking and host to numerous races, including Battle at the Burg);

● Numerous recurring group rides – including a Tuesday Night Dirt Road Ride (starting in the Fall and leaving from Townsend Park) and Pedal GR (a ride organized by the Rapid Wheelmen Bicycle Club, which leaves from Founder’s Brewery Company on Wednesday nights).