I was recently fortunate to meet one of Michigan’s bicycle personality, Ross Hill, at Riverfront Bike Shop in Lansing. Ross isn’t one to jump on the newest technology or bike trends. You won’t see him on a carbon frame or with aero wheels. He prefers riding a 1888 Columbia Light Roadster. I believe he said the front wheel is 53 inches! 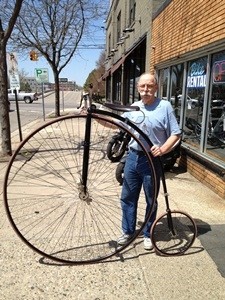 This classic bicycle had all original parts until about eight years ago when Ross, and his bicycle, were struck by a car in a hit-and-run accident. The car sideswiped Ross and struck the bicycle’s pedal.

Ross was knocked to the ground and fractured his scapula. Fortunately, the Eaton County Sheriff’s found the driver and Ross made a quick recovery. He was back on his bike three months later. In fact, last year Ross logged 3300 miles on his bicycle!

Ross did raise an interesting bicycle law question – Does MCL 257.662(2), which requires bicycles to be equipped with a brake that enables the operator to make the braked wheels skid on dry, level, clean pavement, apply to a bicycle like this? If an operator of such a bicycle was to lock the brakes and skid, an injury would almost certainly follow. As Ross pointed out, we have an exception to seat belt laws for classic cars in Michigan (MCL 257.710e creates and exception to Michigan’s seat belt law for cars manufactured before January 1, 1965). Unfortunately, there are no exceptions to Michigan’s bicycle laws for classic bicycles.